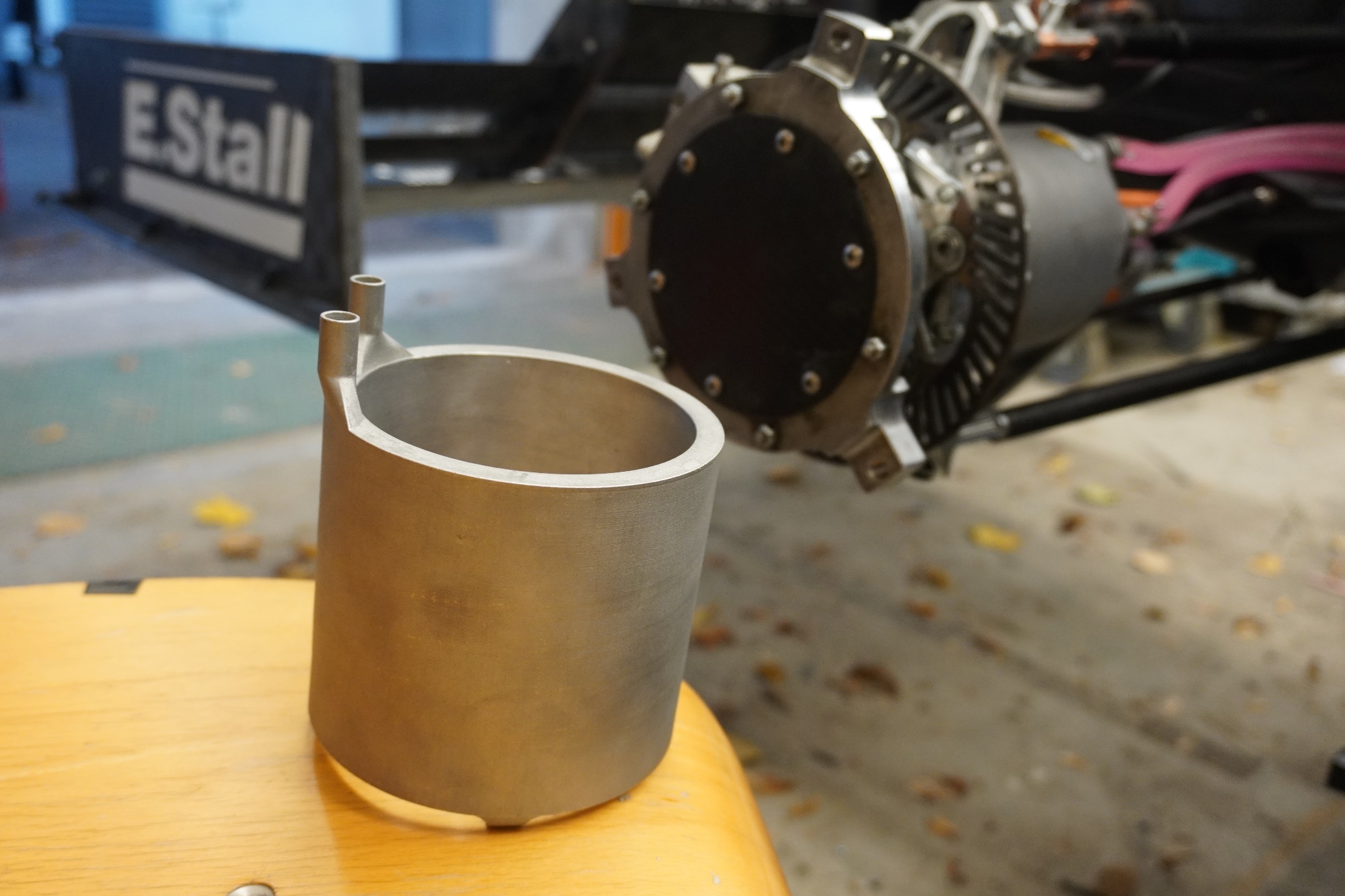 Using Additive Manufacturing technology, the Formula Student Racing Team E-Stall of the University of Applied Sciences Esslingen, Germany could successfully improve the cooling of the electric drivetrain and power electronics. Printed with highest accuracy on EPlus3D’s EP-M260, the aluminum made parts can easily dissipate the generated heat and therefore improve the performance of the racecar.

The racing team E-Stall of the Esslingen University of Applied Sciences is designing and constructing an electric racecar to compete in the Formula Student competition. Together with EPlus3D, three components could be massively improved from which two of them are heat exchangers.

What is the Formula Student Germany competition?

In formula student, a student team builds a single seated formular racecar with which they compete against other teams from all over the world. The competition is not won solely by the team with the fastest car, but rather by the team with the best overall package of design, performance and financial and sales planning.

The Formula Student challenges the team members to go the extra mile in their education by incorporating into intensive experience in building and manufacturing as well as considering the economic aspects of the automotive industry. Teams take on the assumption that they are a manufacturer developing a prototype to be evaluated for production. The target audience is the non-professional Weekend-Racer. The racecar must show very good driving characteristics such as acceleration, braking and handling. It should be offered at a very reasonable cost and be reliable and dependable. Additionally, the car's market value increases through other factors such as aesthetics, comfort and the use of readily available, standard purchase components.

The challenge the teams face is to compose a complete package consisting of a well-constructed racecar and a sales plan that best matches these given criteria. The decision is made by a jury of experts from the motorsport, automotive and supplier industries. The jury will judge every team's car and sales plan based on construction, cost planning and sales presentation. The rest of the judging will be done out on the track, where the students demonstrate in a number of performance tests how well their self-built racecars fare in their true environment.

E.Stall has been an inherent part and proven competitor in Formula Student for many years. Based on the findings of the past racing seasons, they wanted to improve the cooling system of their electric racecar in terms of reliability. The previous cooling jacket used by the E.Stall team was made of a temperature resistant polymer, which was fitted directly around the electric drive, consisting of two shells. The purpose of the cooling jacket is to regulate the temperature of the drive and to prevent overheating. Without sufficient cooling, the risk of damage occurring in the motor is quite high. During the season using the polymer cooling jacket, it was shown that a two component solution is prone to leakage and therefore to problems.

In an electric all-wheel-drive racing car, the high-performance electric motors must be cooled. Since these motors have a high power density of 10kW/kg, they would overheat under full load without cooling. There are two cooling circuits, one for each side. All four motors are being cooled as well as the corresponding inverters. By using EPlus3D’s design for additive manufacturing expertise and their latest metal powder bed fusion solution EP-M260 Dual-Laser, the leakage problem of the cooling components could be solved and performance could be increased significantly.

Thanks to the versatility of the technology of metal 3D printing, the E.Stall team was able to test new shapes, which was not possible by means of traditional methods until now. At the same time the entire surface of the cooling jacket can be used for heat dissipation thanks to the nature of the aluminum material.

“The 3d printed cooling jacket will be an efficient and reliable product. We were able to create complex structures, which is unthinkable in any conventional way. With the help of the EPlus3D and the latest additive manufacturing technologies we were able to reduce the wall thickness due to the high accuracy of the 3D printer and therefore reduce the overall size of the parts.”

Next to the cooling jacket, EPlus 3D supported E-Stall with a cooling plate for their inverters and a steering component. Both also inherited the functional integration of several components, lightweight design and overall performance improvements. 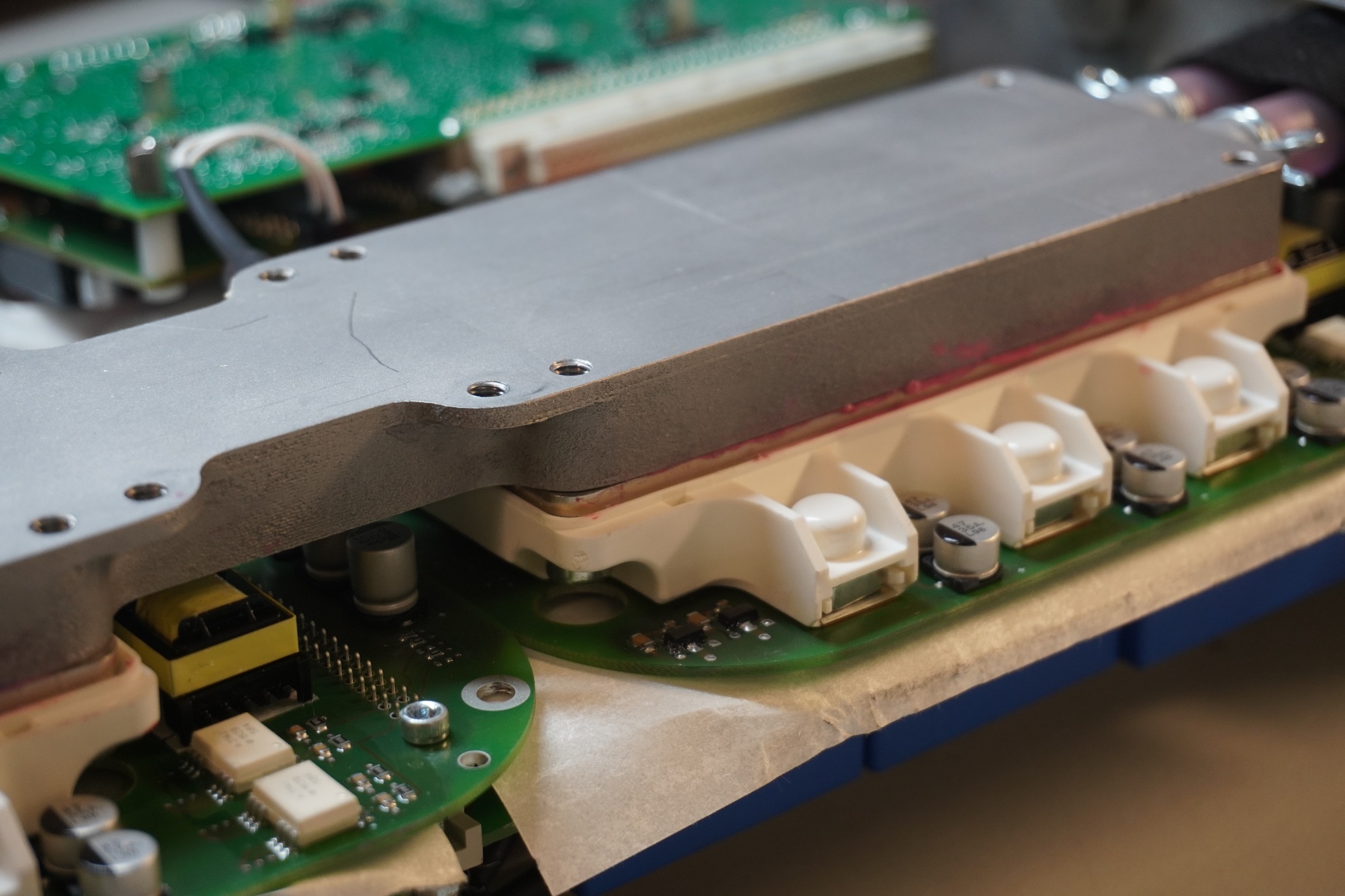 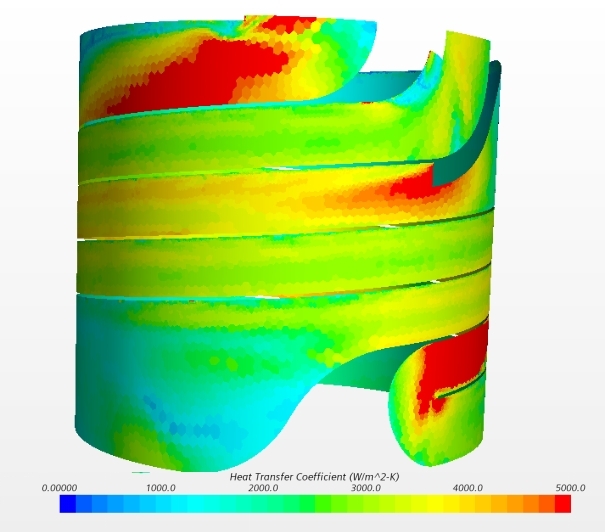 Due to the functional integration of the cooling system, connectors and mounting, assembling steps are saved and the failsafe design is not prone to leakage anymore. The minimum wall thickness of the part helps to reduce the overall diameter and therefore create more space for other suspension components that are based around the electric motor.

The high quality of the prints is crucial to the function of them. A well fitting, press fitted cooling jacket was as important as the straightness of the cooling plate for the inverters. Both parts could achieve their functions well and kept the motors and inverters below 65°C which according to the team is an “unbelievably good result”. Compared to the last season, where the motors hit 120°C on a regular base, the advantage of EPlus3D’s manufacturing process, that allows to integrate the design is clearly shown. 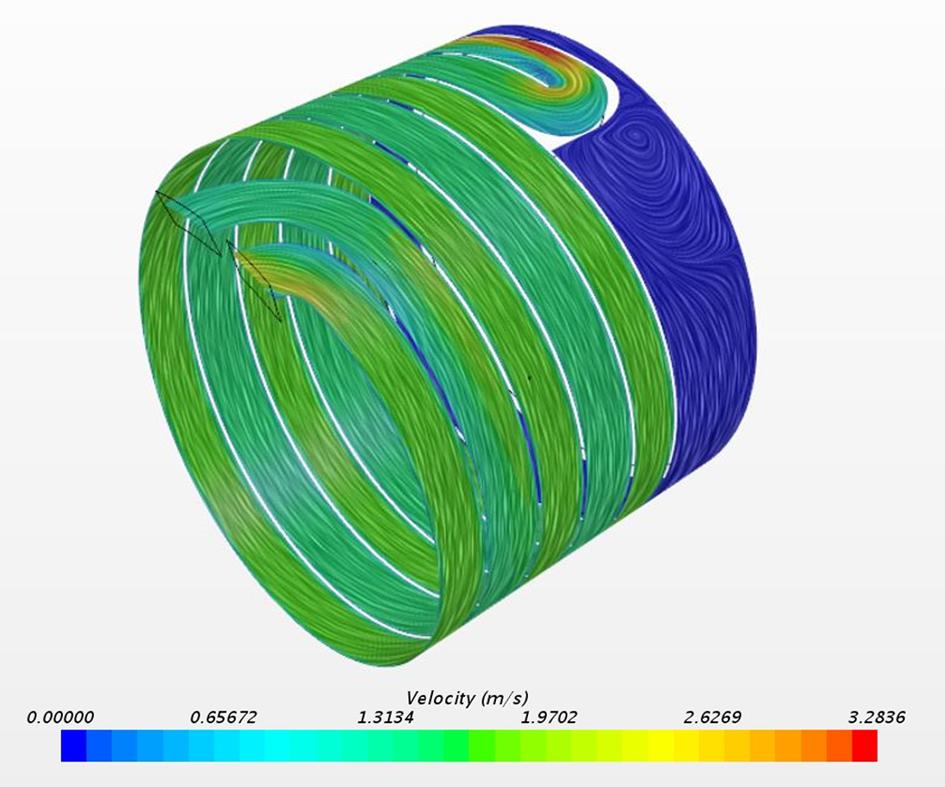 The design of the cooling jacket allowed a simulated cooling capacity of 3,8kW. Due to the low temperature of the components, they can operate more efficient, which leads to a longer range of the overall car as well as an enhanced acceleration.

Due to the great engineering of components and overall parts and the dedication of the whole E-stall Team, they have achieved 4th place in Engineering Design Competions in FS Czech and FS Alpe Adria. According to Felix Wenzelburger, Project Manager Powertrain & Vehicle Dynamics, “this discipline is the most important one out of all static disciplines and evaluates the technical knowledge of the team and the processes they use to design the car.”

In Croatia they completed the Endurance Event and got first place in the Efficiency Category. The Endurance Event tests the reliability of the car and each component. Furthermore, the most points are awarded for this discipline. This is why a successful Endurance Event is the main goal for every Formula Student Team and therefor a huge milestone for them. This endurance event shows the great reliability and functionality of heat exchangers manufactured in metal additive manufacturing. In the future, we will see an increasing demand of such applications in areas where lightweight and performance is crucial. 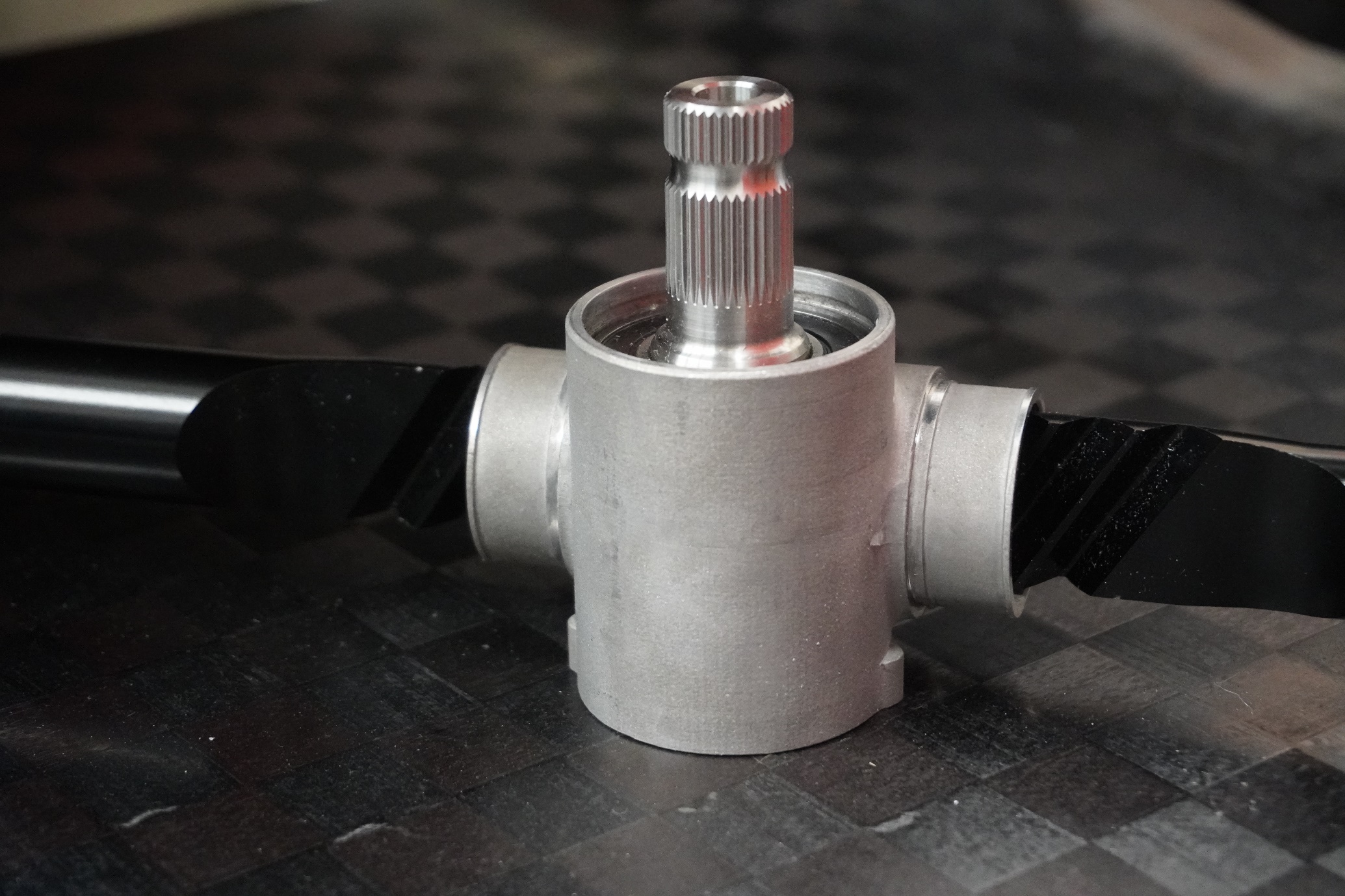 Figure 5: The housing of the steering gear was printed by EPlus3D as well.

Have questions? Contact Eplus3D now!
We will get back to you soon about your any questions to offer right Additive Manufacturing solution!
CONTACT US